Since it’s the middle of autumn, I just had to take advantage of using some delicious, local apples, and make an apple and raisins tray cake. I chose to make a fluffy apple cake, even though one of the most popular Romanian apple cakes is made with a dough that has a crumblier texture. 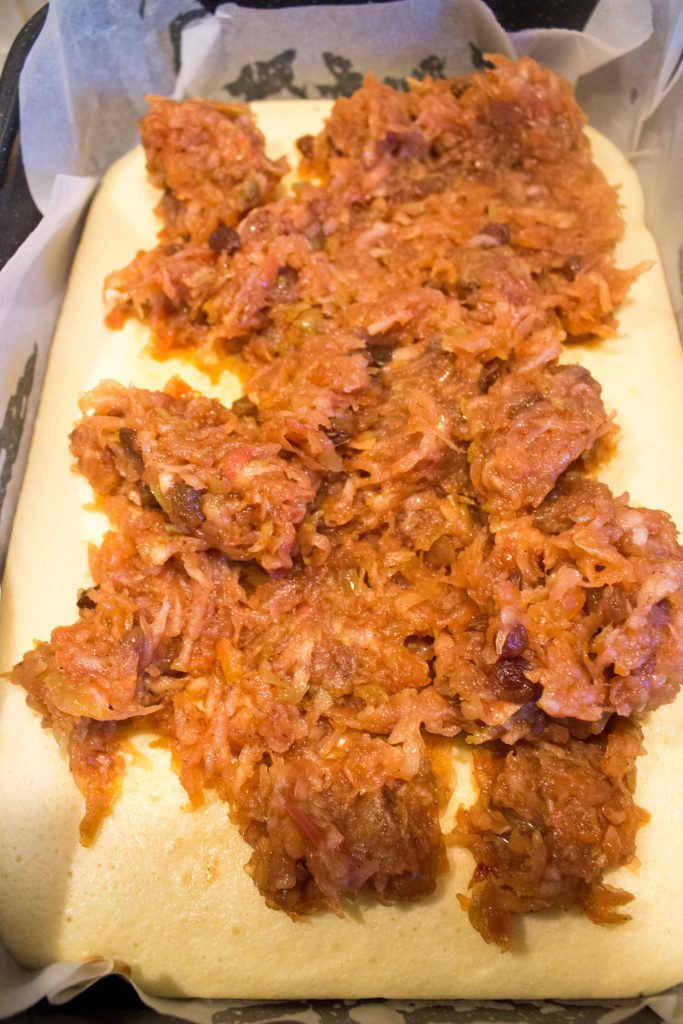 If you’ve followed my blog for some time, you’ve probably seen that I have a thing for fluffy cakes. Even so, for the next recipes, I’ll try to get out of my comfort zone and show you some other types of cakes and cookies. 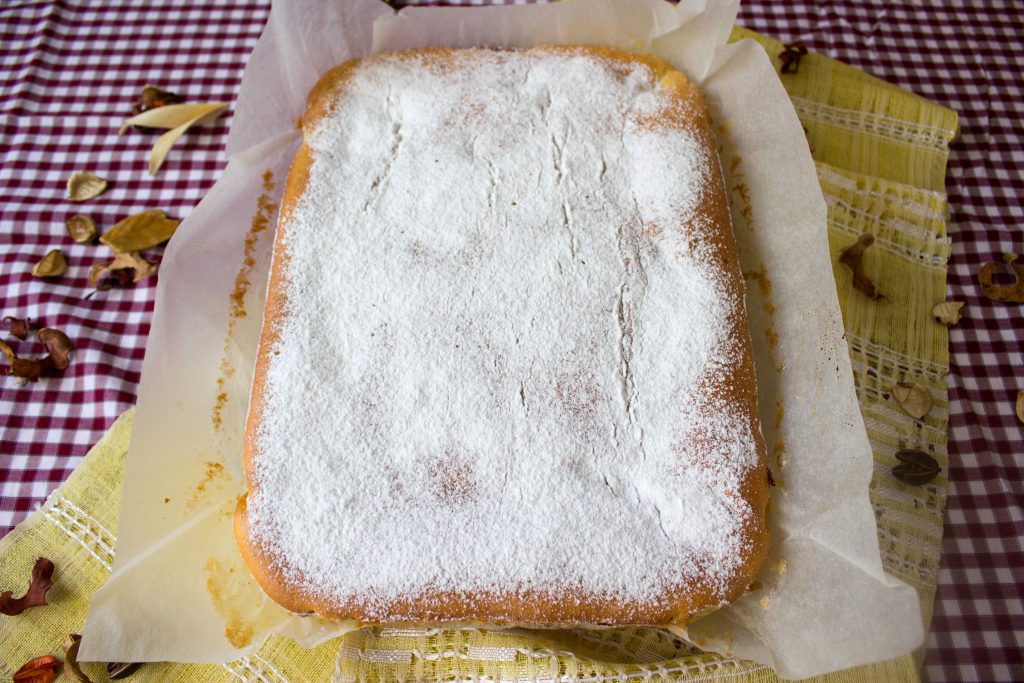 But let’s stick to our cake right here – I chose to make a filling which contains grated apples cooked in a pan with sugar, then I added some delicious raisins and a teaspoon of cinnamon which made my kitchen smell heavenly. 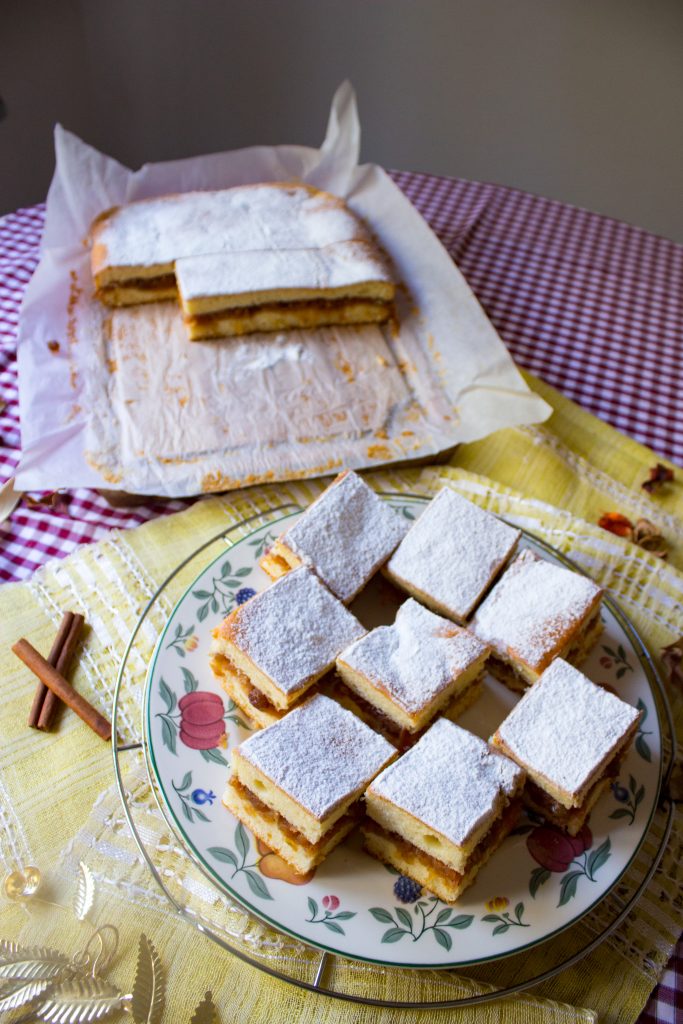 I’ve used some red apples from the region of Voine?ti, a village in Romania which is very popular for its apple trees – you’ll find a wide variety of Romanian apples here and some beautiful sceneries. If you decide to visit this part of the country, you’ll see that it’s only 1.5 hours away from Bucharest, so you can easily get there. You’ll find lots of locals who sell fruits and vegetables in front of their houses, and most of them are always happy to invite you in their gardens. 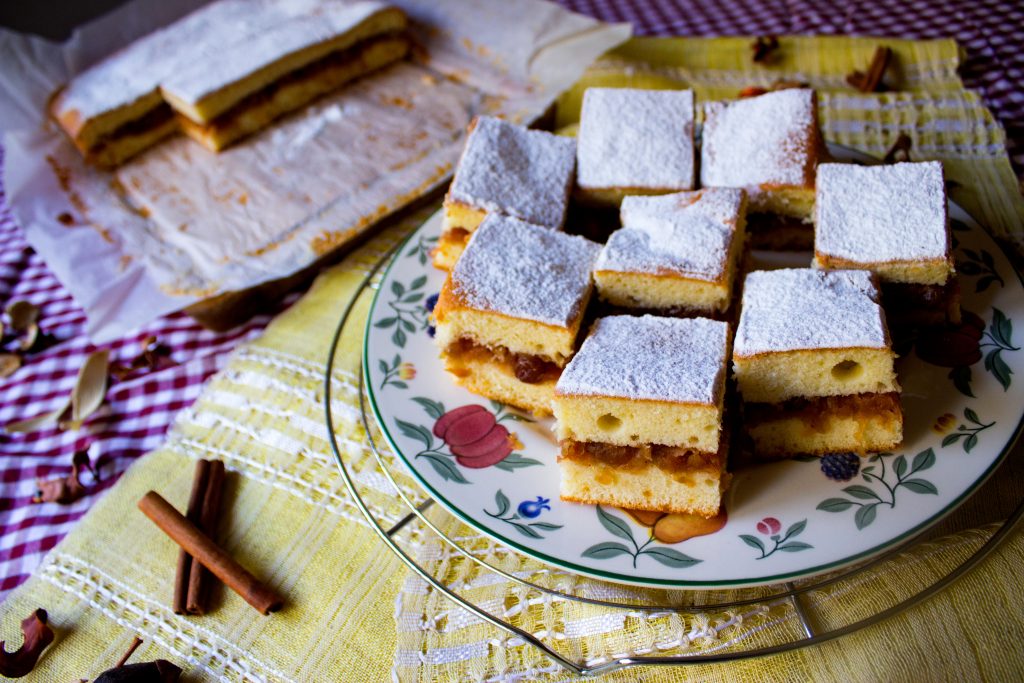 If you want to try making this Romanian apple cake (please do, it’s amazing), make sure you leave the eggs and the milk out of the fridge to reach room temperature before starting to use them. I’ve noticed that if you want to get a fluffy apple and raisins cake, you really need to have all the ingredients at the same temperature. 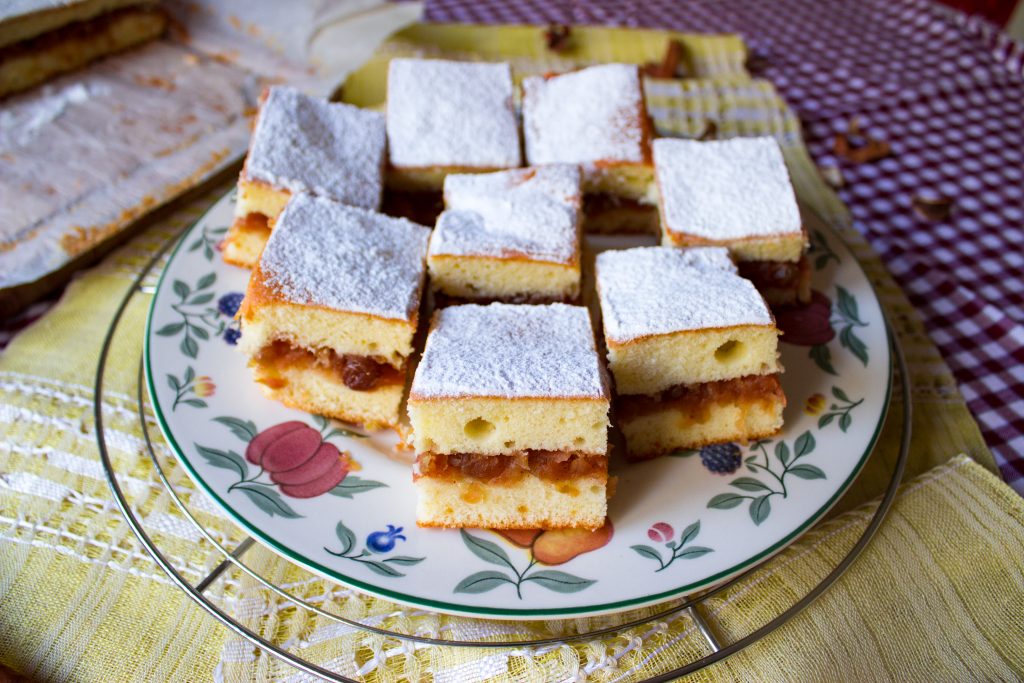 If you don’t use red, sweet apples like I did in this recipe, you can choose to add up to 50 grams of sugar more to the filling, especially if you use green, sour apples such as Granny Smith. You’ll have to taste the filling while making it and add sugar to taste. 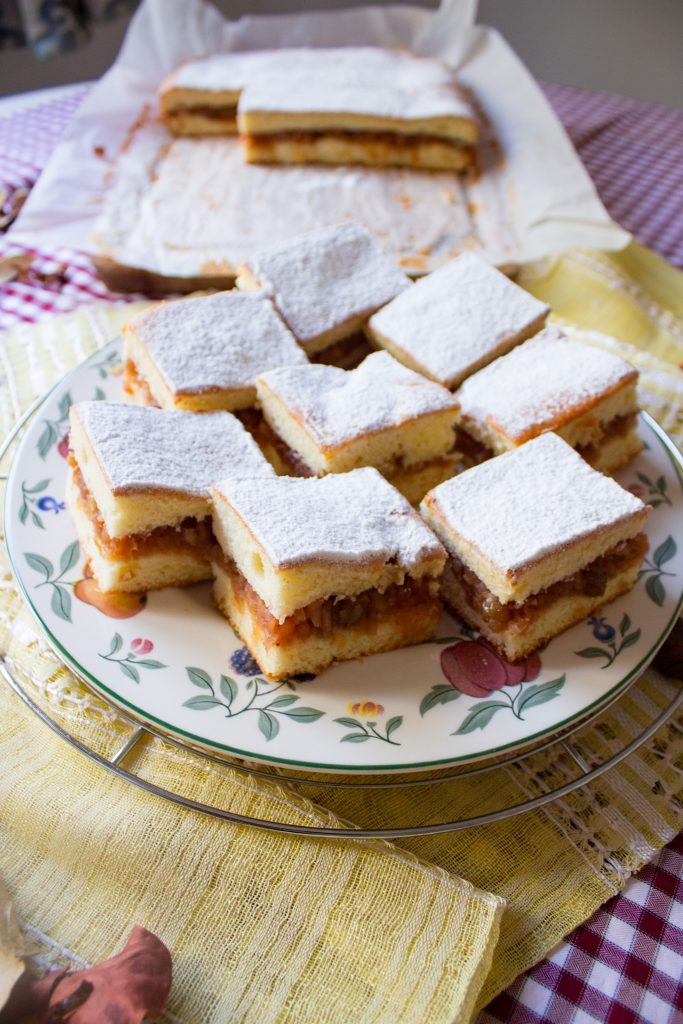 This cake is a bit different from what I’ve done before. In Romania, it’s actually called ‘poured apple cake’. The batter has a pancake-like consistency, and you have to bake the cake in several stages. First, you pour half of the batter in the tray and cook it for 10 minutes. Only then you can add the filling, and the other half of the batter. The trick is to not completely bake the base part of the cake, but just make it firm enough to hold the filling. 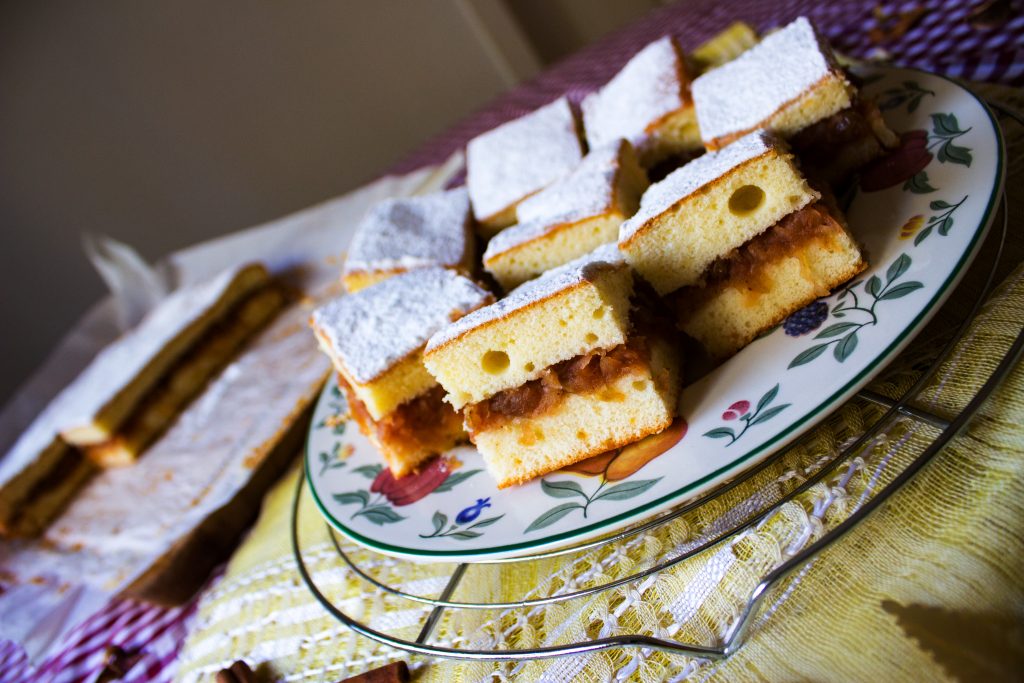 You can also find on Delicious Romania another version of an upside-down Romanian apple cake with whole apples filled propecia online cheap with sour cherry preserve and topped with whipped cream. 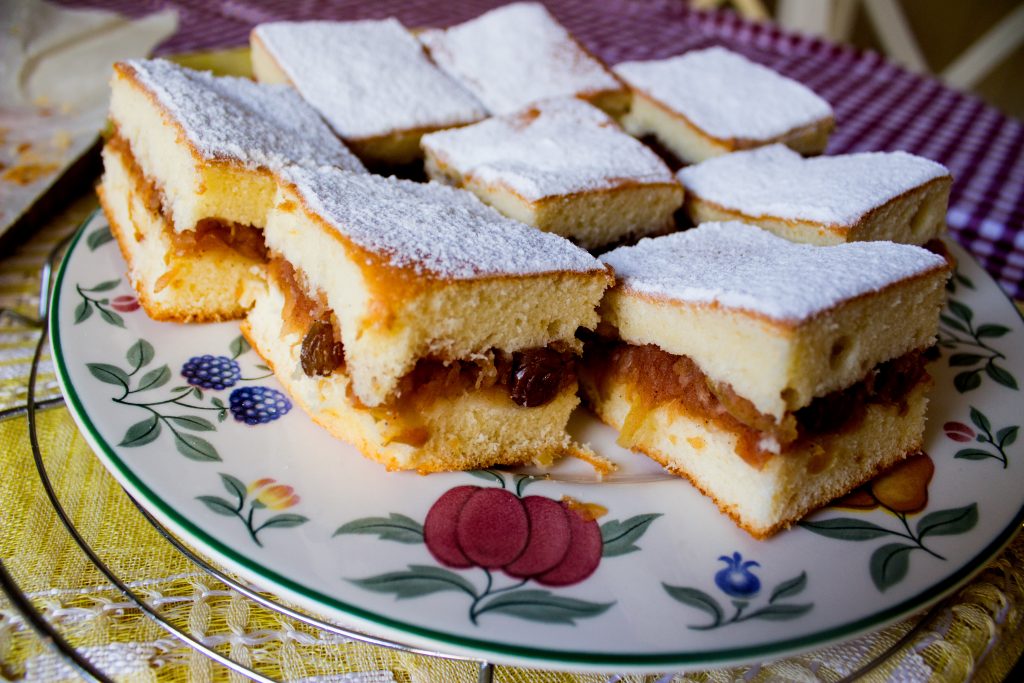 Plus icing sugar for dusting